When Kazunori Yamauchi and his band of developers at Polyphony Digital launched the first Gran Turismo game in 1997, he never could have predicted the stratospheric success the PlayStation® game (and its successors) would achieve. In the 23 years since, the driving simulation game has become a cultural phenomenon. Gran Turismo Sport (the current entry in the series) has 10 million users, the series is an esports pioneer and tours huge FIA (Fédération Internationale de l’Automobile) approved competitions and live shows. There is even a Gran Turismo café in Japan and both Spain and Australia have street names celebrating the game.

Gran Turismo’s success is largely down to Polyphony’s single-minded pursuit of realism. Each car is painstakingly reproduced in the game, reflecting its real-world visuals, sound, performance and dynamics to an uncanny degree. The most recent recipient of this treatment is the award-winning Mazda RX-VISION concept car, launched in May 2020 as a playable download in collaboration with Mazda – celebrating the manufacturer’s 100th Anniversary. The vehicle has been given a racy makeover and competes in the official FIA GT3 classification online. For the first time, driving the Mazda RX-VISION concept car is possible. 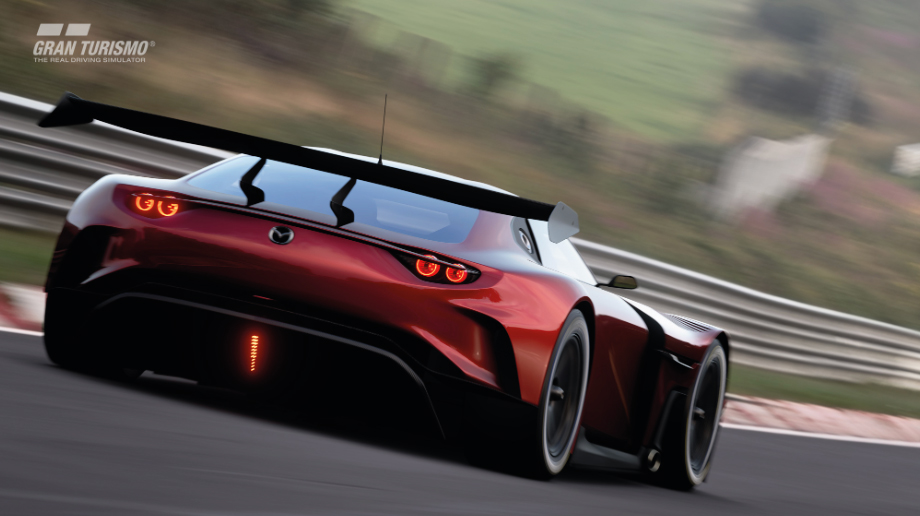 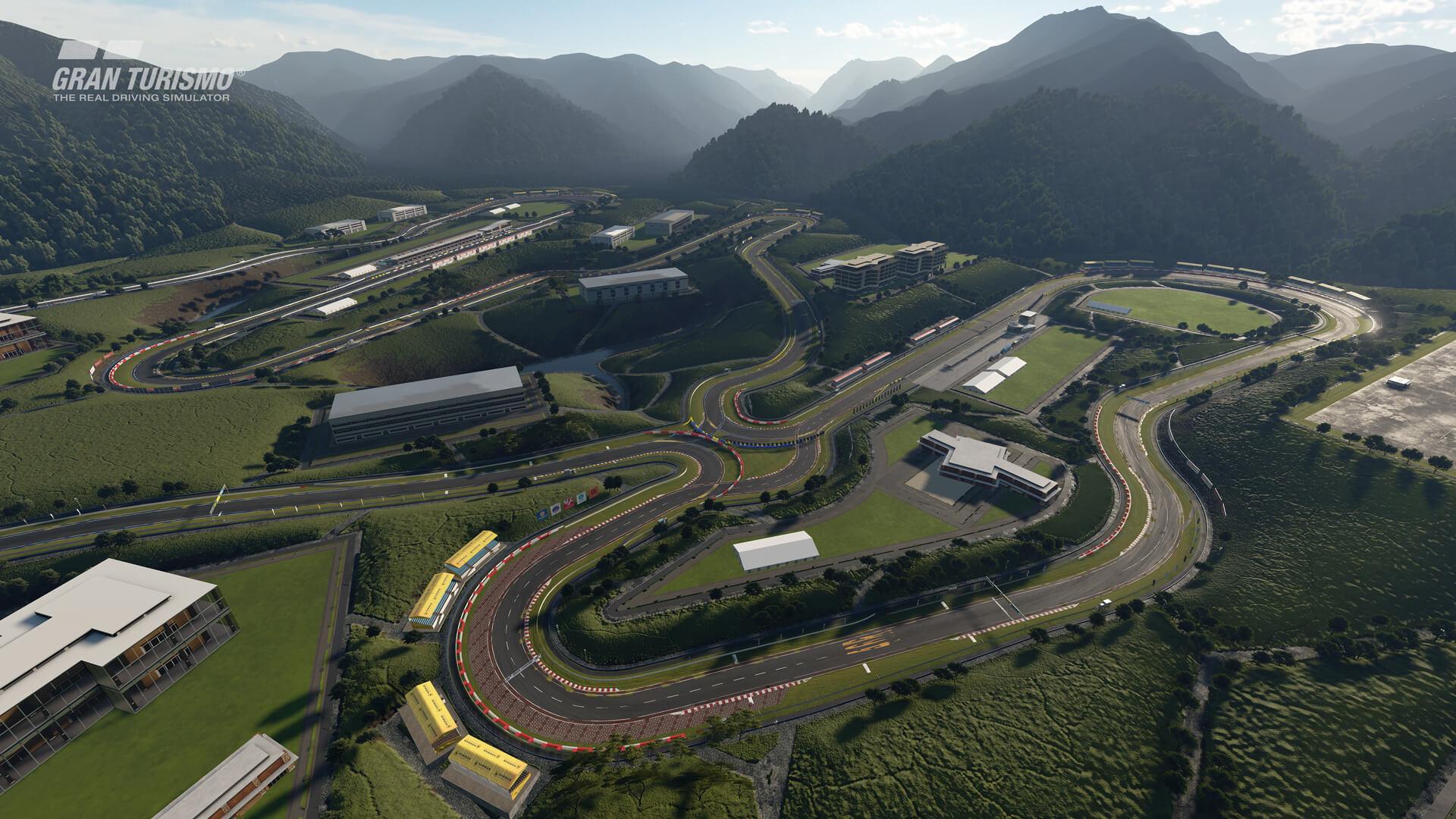 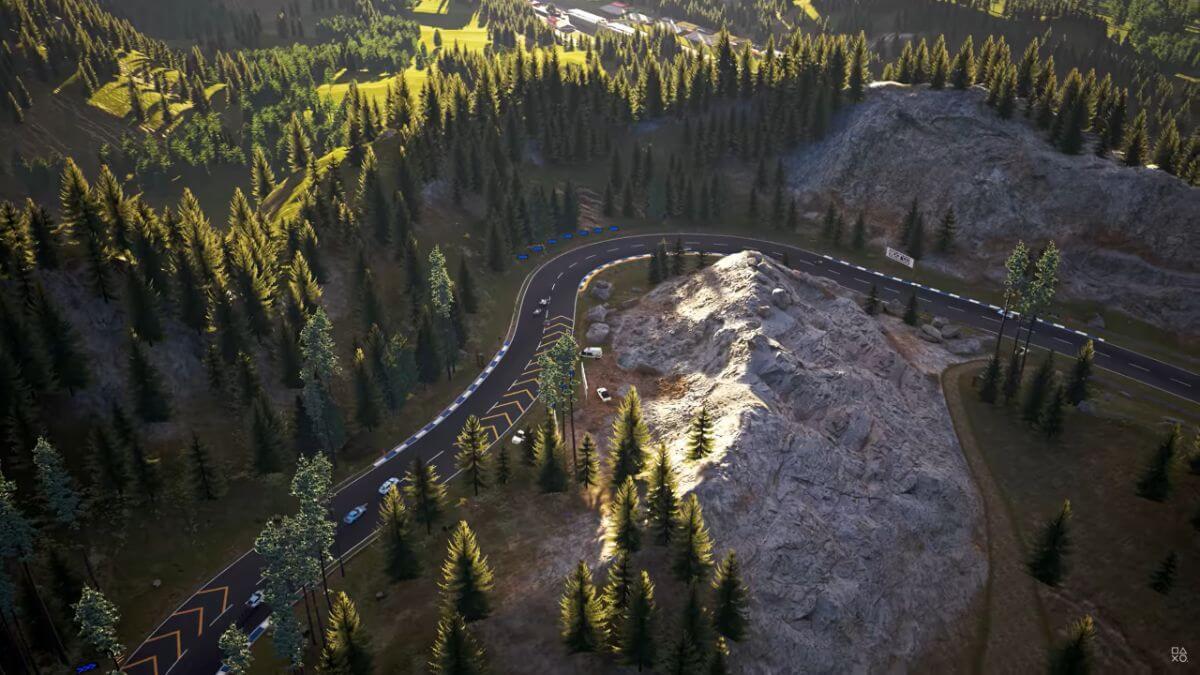 Yamauchi speaks at a convention; the RX-VISION GT3 CONCEPT in action; images from Gran Turismo 7.

The inclusion of the (renamed) RX-VISION GT3 CONCEPT in Gran Turismo came from a conversation between Yamauchi and Ikuo Maeda, Head of Global Design at Mazda. The two had met at a motor show in 2013 and struck up a friendship (“I’m just a fan of Maeda-san in general!”). In 2019 they decided the inclusion of a special Mazda in Gran Turismo Sport would be a great way to mark Mazda’s centenary, and the RX-VISION’s chief designer Norihito Iwao grabbed the opportunity to lead Mazda’s development team: “It was really exciting to be able to design the vehicle for a game I love to play!”

This is a surprisingly representative example of how the Gran Turismo team decides which cars to include in its games, and Yamauchi says it is “primarily cars that we like as a team” that feature. Usually these cars already exist in the real world, but on a few exceptional occasions manufacturers working on an unannounced vehicle will approach Yamauchi “somewhere between half a year to several years ahead of the car’s release” to ensure it is included in the next Gran Turismo game.

The process of creating a playable version of each vehicle in Gran Turismo is as mind blowing as it is meticulous. Once the Polyphony team has decided a certain car will appear, they set about the six-month process that will result in its digital representation taking to the game’s tarmac. Realism is everything, and Gran Turismo’s Modeling Team Supervisor Keiichi Ashizawa describes the early stages of the process, which focuses on physically modelling the car. The team photographs every inch of the vehicle in question. Thousands of images are taken, and Ashizawa says that “even details that aren’t normally visible” in the game (the backside of the steering wheel, for example) are captured and included. Those playing the game with a Virtual Reality headset are encouraged to test this claim. Next, the imagery and schematics (provided by the manufacturer) are matched using Polyphony’s data capture software, and the car takes shape in digital form.

It may seem simple, but Ashizawa says “it’s a lot more complicated than it sounds”, with debugging and troubleshooting taking significant chunks of time. The conversion of the Mazda RX-VISION concept car into a fire breathing GT3 racer is a case in point. Despite having the necessary data and images, both Ashizawa and Mazda’s Iwao struggled to recreate the front and rear fenders to accommodate the expanded width of the race car. Iwao laughs that he “can’t remember how many times” they revised that portion of the design.

For Iwao – who drives a first-generation British Racing Green Mazda MX-5 First Generation – the project gave him the unmissable opportunity to “create a racing car with a rotary engine that people love all over the world”. For him, the RX-VISION GT3 CONCEPT’s design is “complete from every angle as the vehicle's characteristics are beautiful, but they also have such strength.” The RX-VISION GT3 CONCEPT has to comply with the punishing technical requirements of the GT3 classification, and it has to be both fast and “beautiful”. Iwao discovered that “the quality of work required for the video game is actually the same as that required for creating a real car” and was delighted that the obsession with detail that characterises “the soul of Mazda design” is found in the work of Polyphony, too. 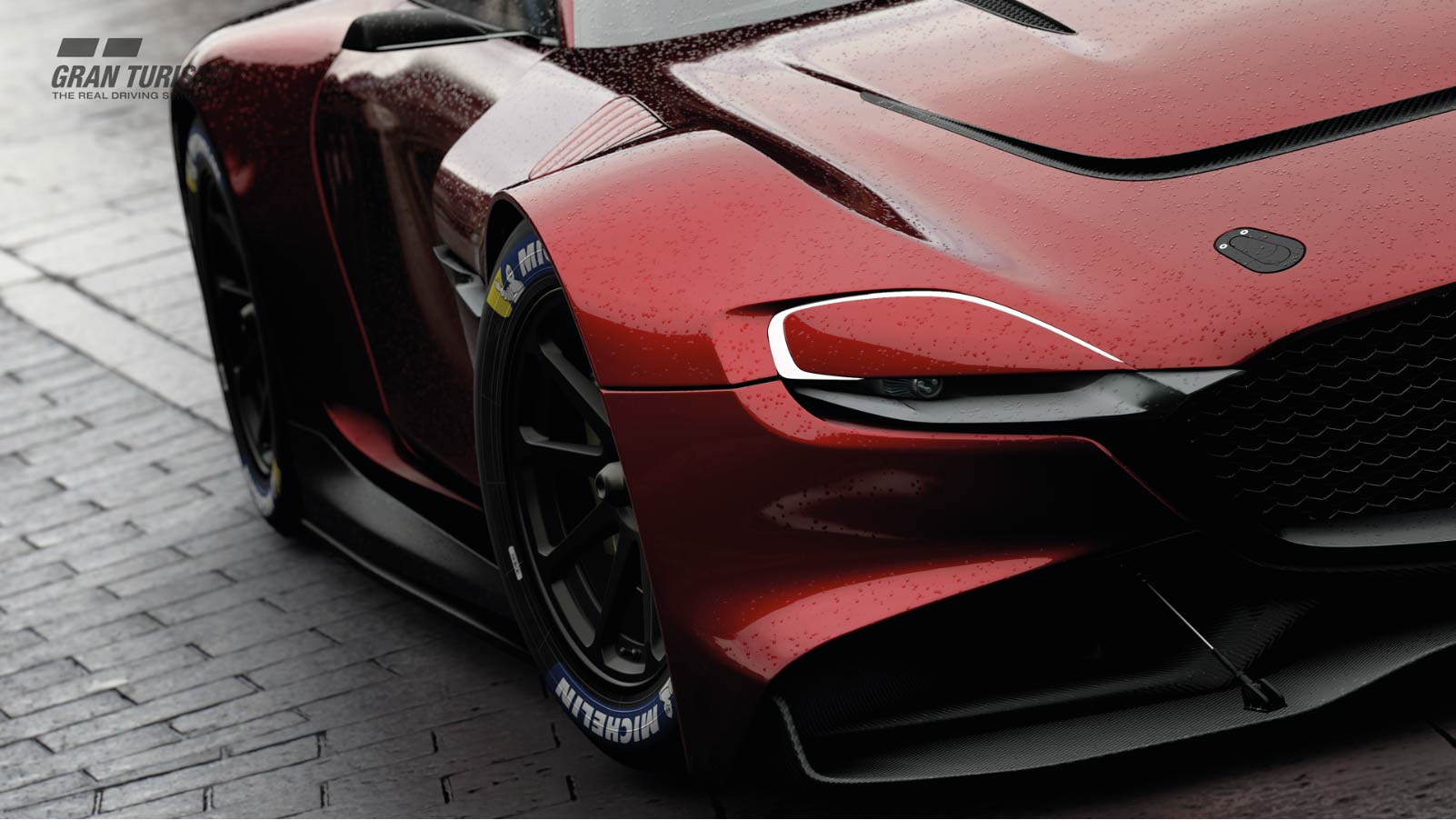 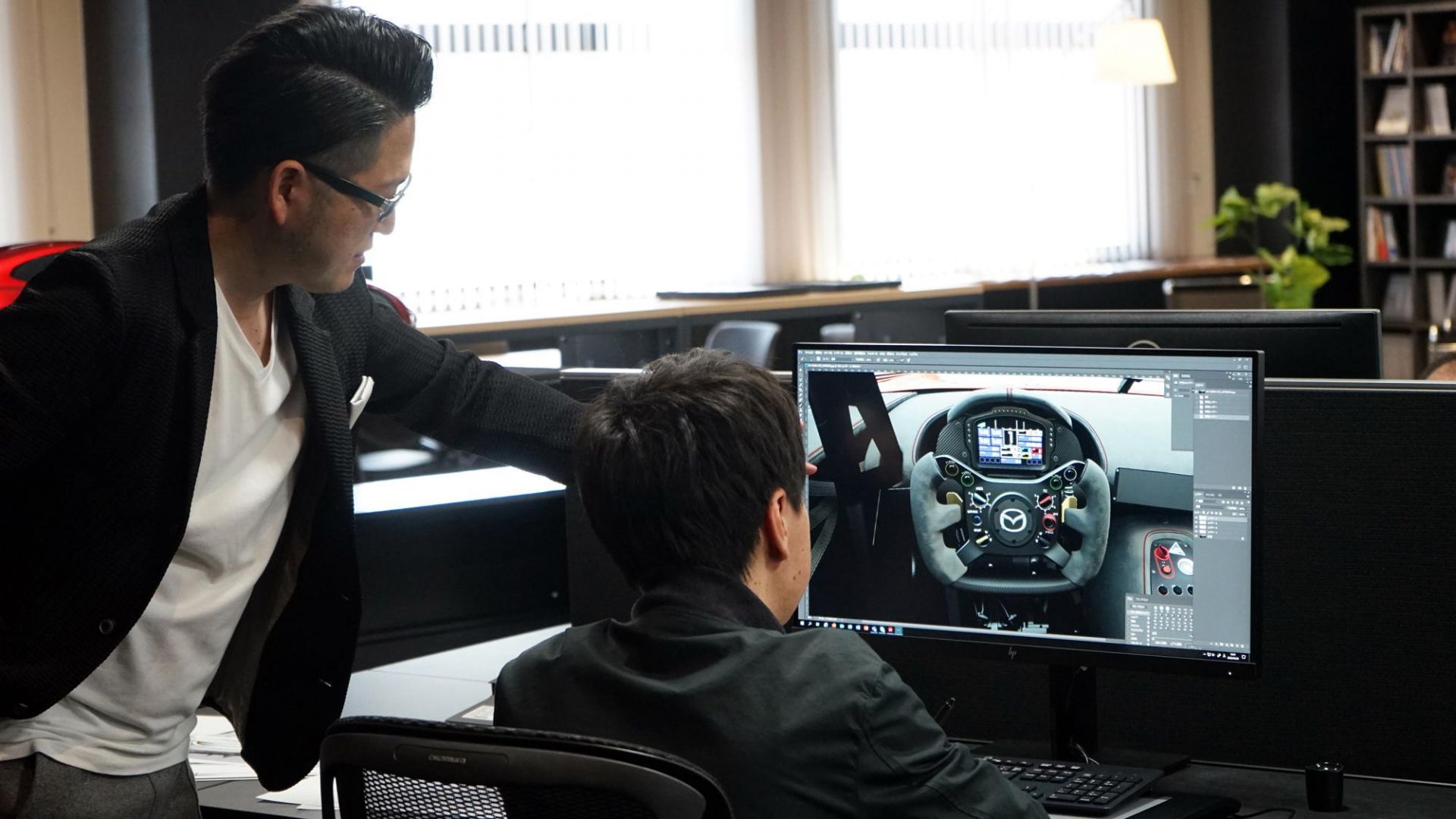 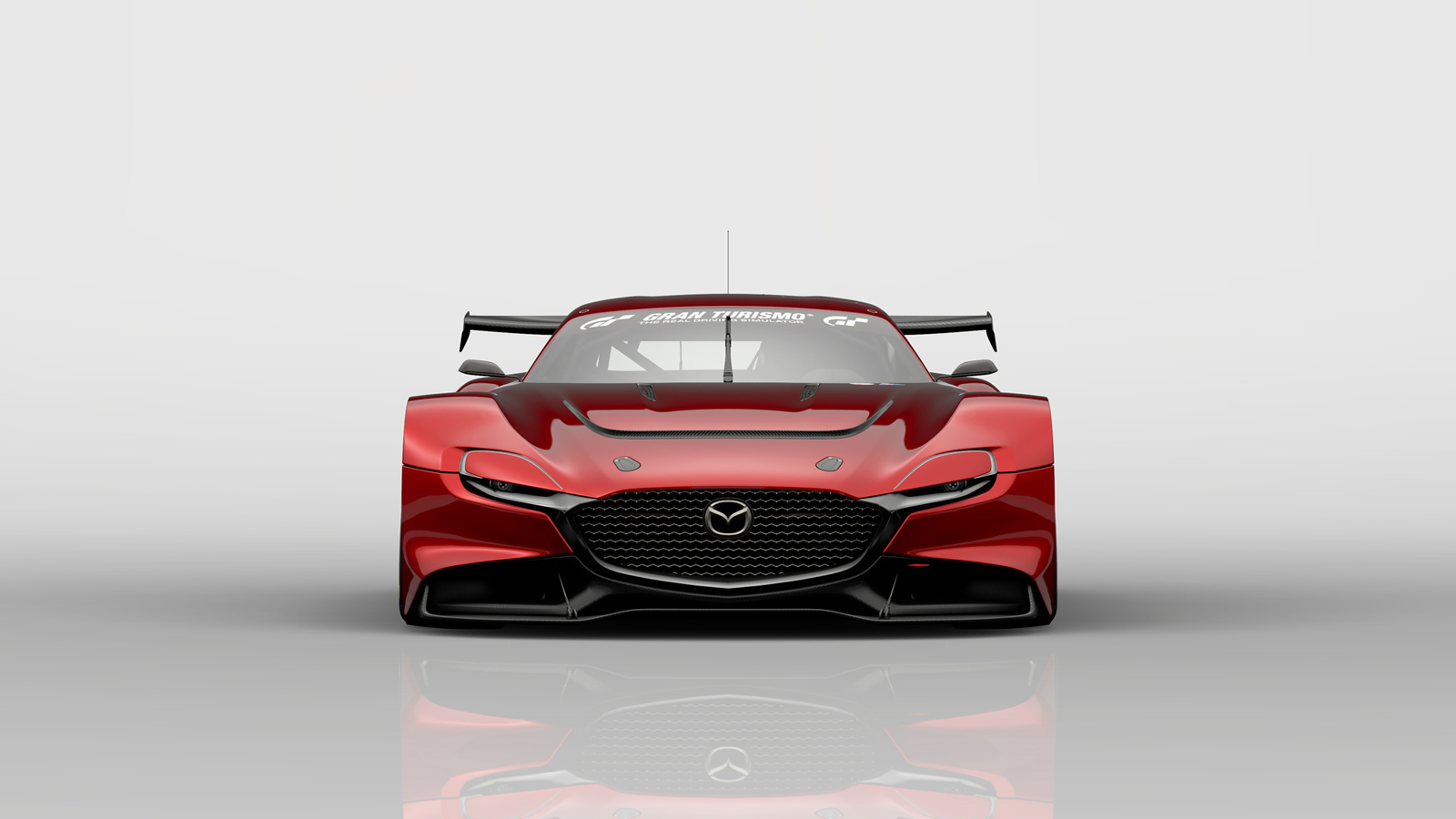 The illusion of reality that Gran Turismo achieves is fragile, and relies on perfection in every aspect of the game’s execution. One crucial element in maintaining this illusion is vehicle sound. Yamauchi explains the process of recreating a car’s engine noise, a procedure that takes a month. First, the team uses a dynamometer to run the vehicle at various speeds on a workshop rig, recording the audio as they go. Using software these sounds are placed in the spatial context of the game, ensuring the car sounds realistic as it travels around a track, or through a tunnel or forest. It is then matched to the car’s performance. This takes a huge amount of skill and experience to achieve, because the human ear subconsciously registers sound from a TV or headset differently to sound in the real world. The challenge for Gran Turismo is presenting the gamer with “the sound we want them to hear”, with the focus on each car’s audio.

The sound of the RX-VISION GT3 CONCEPT is different from most other in-game vehicles in that it is created using audio recorded from another vehicle, in this case Mazda’s Le Mans winning 787B race car. But the Gran Turismo team has given the RX-VISION GT3 CONCEPT its own sonic character via the various environments the GT3 classification races in, providing the four-rotor rotary engine various new stages to demonstrate its incredible scream and howl.

The RX-VISION GT3 CONCEPT launched in May 2020. The car is extremely popular, and is currently averaging 2,000 new downloads every day. Watch the car’s Gran Turismo launch video above.

When the art team finishes modelling the car, it is handed to Gran Turismo’s test drivers, and the job of bringing the vehicle’s driving dynamics to life begins. Initially this is done by entering each car’s specification (including engine output, suspension geometry and wheel tread) into Gran Turismo’s physics simulation engine, which automatically defines how the car feels and drives.

In developing the first Gran Turismo game, Yamauchi relied solely on “technical papers and books” to develop the vehicles. But 27 years of development has created simulation software so powerful that Yamauchi is even using it to help a LMP1 (Le Mans Prototype) team develop their car in the real world (although he won’t reveal which one).

The physics simulation engine may do the initial heavy lifting, but Gran Turismo’s test drivers take responsibility for finessing each vehicle’s dynamics and character. In 2012 Kazuki Yamada won the Gran Turismo Asian Championship, and was offered a test drive role by Yamauchi, an opportunity he eagerly accepted. The main thrust of finalising a car’s handling takes about a week, in which Yamada drives at least “1,000 kilometres a day”, but fine-tuning continues up to the vehicle’s scheduled completion date. In this time Yamada works on the car’s myriad “parameters available for adjustment inside the physics system”, and even spends hours watching YouTube videos of the car, hunting for any clue that might enhance the realism of its handling.

In developing the RX-VISION GT3 CONCEPT, Yamauchi says the challenge was to “express the character of the compact rotary engine, the car’s front engine, rear-wheel drive and transaxle transmission package”. Iwao and his team helped Yamauchi understand “how a four-rotor rotary engine should drive” and the result is the full-blooded, aggressive rotary racer that has taken the Gran Turismo community by storm.

And the RX-VISION GT3 CONCEPT has certainly been a hit. As of September 2020, the car has been downloaded nearly half a million times, and is currently experiencing 2,000 downloads a day. It seems Gran Turismo’s dedication to realism is proving as popular as ever. I ask the team what the future holds for the series. Yamauchi is philosophical, and says that while “video games simplify the complex workings of nature, distilling them into simulation,” he believes game developers will always struggle to truly reflect reality. Despite this, it is “something we at Gran Turismo will continue to aspire toward”.

And what about the RX-VISION GT3 CONCEPT, is there a reality in which we may see a production version of the car? Iwao considers: “Everyone wants us to create the RX-VISION road car as soon as possible. I can’t tell you whether it will happen, but personally I’d love to make a rotary-powered car for our fans, and hopefully someday we will make it happen, that is our wish.” For now, the RX-VISION GT3 CONCEPT will have to suffice.

Over 180 Mazda vehicles have featured in various Gran Turismo games over the years. The series launched in 1997 with over 20 Mazdas available to drive. Since then, each new entry in the franchise has featured more Mazdas, including the original MX-5, Gran Turismo exclusive LM55 concept car and legendary vehicles such as the 787B race car and RX-7 GT-X (all above).