Thirty years after the Mazda MX-5’s launch, owners explain why it remains the world’s favourite sports car. We start with Texas fan Fred Jones (above), who loves dressing sharply – and is proud of the style statement his pair of MX-5 Miatas make on the road

Fred Jones may just be the most dapper MX-5 driver to ever hit the streets of Dallas, Texas. “Fashion has always been my go-to since the mid-70s. I’ve always been interested in style, and I’ve always driven unusual cars,” he says. Fred owns both an NB and NC MX-5, and frequently turns heads when driving around his neighbourhood. “I call the second series model Robin, from Batman and Robin,” he smiles. The NC, meanwhile, is known as the Panther. “It has the look of a panther that’s hunting in the jungle; the speed, the stealth… People know when they see the car, that it’s mine. They say: ‘There goes Fred!’ It’s become my signature.”

But fashion isn’t just a hobby for Fred – he runs Jones 2000 & Beyond, an organisation that holds workshops for young people and ex-offenders on attire, etiquette and social skills. “All this is still tied in with fashion – what to wear, when to wear it, and how to present yourself,” he says. And the MX-5, he says, fits perfectly with the work he does. “It’s timeless and traditional, but changes with the times in a way that maintains its core values. When you look at the MX-5 through its stages, it represents transitions in my own life. The fourth series has improved on the original, and all that is significant in how my life has moved forward. I just can’t see myself driving anything other than an MX-5.”

Model: NB (pictured) and NC
Produced: 1999/2006
Owned NB since: Valentine’s Day, 2008
MX-5 highlight: “After hand-washing the car, I drop the top and hit the streets, playing music and enjoying the drive.”

One of Tobias Wehner’s fondest memories is touring the Alps for four days in his MX-5, with his then four-year-old son by his side. “The MX-5 was perfect, and Erik loved driving with me,” says Tobias, who now has another son who’s just as enthusiastic. “When we drive the family car, a Mazda CX-5, my younger son Mats always asks: ‘Why don’t we drive the loud car?’”

The ‘loud car’ is Tobias’s MX-5 ND with a sports exhaust, which he’s owned since 2016. He bought his first-ever MX-5 – the NB – in 2005, and owned an NC before settling on the ND. “The ND is the best of all – it has all the modern technology. It’s the perfect mixture,” he says. Tobias drives his car every day, year round, “even in heavy snow... and I love it,” he says. “After I bought my first MX-5, I joined the MX-5 Freunde Fulda, a group of MX-5 drivers who drive a tour each month between April and October.

Over the years, I’ve only missed a handful of tours and have led them for a couple of years now, too.” When Tobias’s wife became pregnant with their first child in 2011, they decided that the MX-5 was a perfect car in which to transport baby Erik. Then came the father-and-son tours – the four-day tour of the Alps in September being a particular favourite. The arrival of his second son in 2015 meant Tobias couldn’t attend the Alps tour that year. But Mats drove his first afternoon tour when he wasn’t yet two, and the family is currently planning his Alps driving debut.

“He’s going to love it!” says the proud father.

“IT PUTS A BIGGER SMILE ON MY FACE THAN ANY SUPERCAR”

Freelance motoring journalist Dan Trent has a job any car fan would dream of. Dan, who is based in West Yorkshire, tests some of the most exciting cars for magazines across the globe. But when it came to putting his own money into a car, there was only one option. “One Christmas I received a bit of a windfall, with strict orders not to spend it on a car,” he recalls. “But one of my brothers had previously spent his student loan on an MX-5 and my other brother has one too. So there was only one thing for it…”

Within days Dan had bought a 1993 Eunos Roadster, an imported Japanese market version of the original MX-5. He’s owned it for eight years now. “I’m lucky enough to drive all sorts of exotic machines for my work,” he says. “But the Eunos will always be special; first because it’s mine, but also because it puts a bigger smile on my face than any supercar.”

Dan’s mother, Caroline, has been an inspiration, too. She celebrated retiring and becoming a grandmother by buying herself a brand-new Soul Red 1.5 Sport Nav. “I was on a Mazda event in Japan the weekend the car launched in the UK,” says Dan. “My mum had been acting strangely before I flew out, and I found out why when a text arrived with a picture of her collecting a brand-new MX-5 on the very day it launched in the UK. I was actually with a delegation of Mazda board members and they were over the moon when I showed them the photo. And my kids think she’s the coolest granny in town.”

Dan’s even convinced his mother to test her Mazda’s limits on a track day, an experience they shared at Anglesey Circuit in Wales. “There’s no doubt where I inherited my need for speed from, or my impulsive car-buying habits.”

Model: Eunos NA
Produced: 1993
Owned since: 2011
MX-5 highlight: “A summer Scottish road trip with friends in roadsters taking in loads of epic roads, chatting round the campfire and sleeping by the beach. It’s what the MX-5 was made for.”

Model: ND
Produced: 2015
Owned since: 2015
MX-5 highlight: “The track day with Dan was terrifying at first but I ended up amazed at how fast my little Mazda could go round corners – it was a real eye-opener and has helped me enjoy the car even more!” 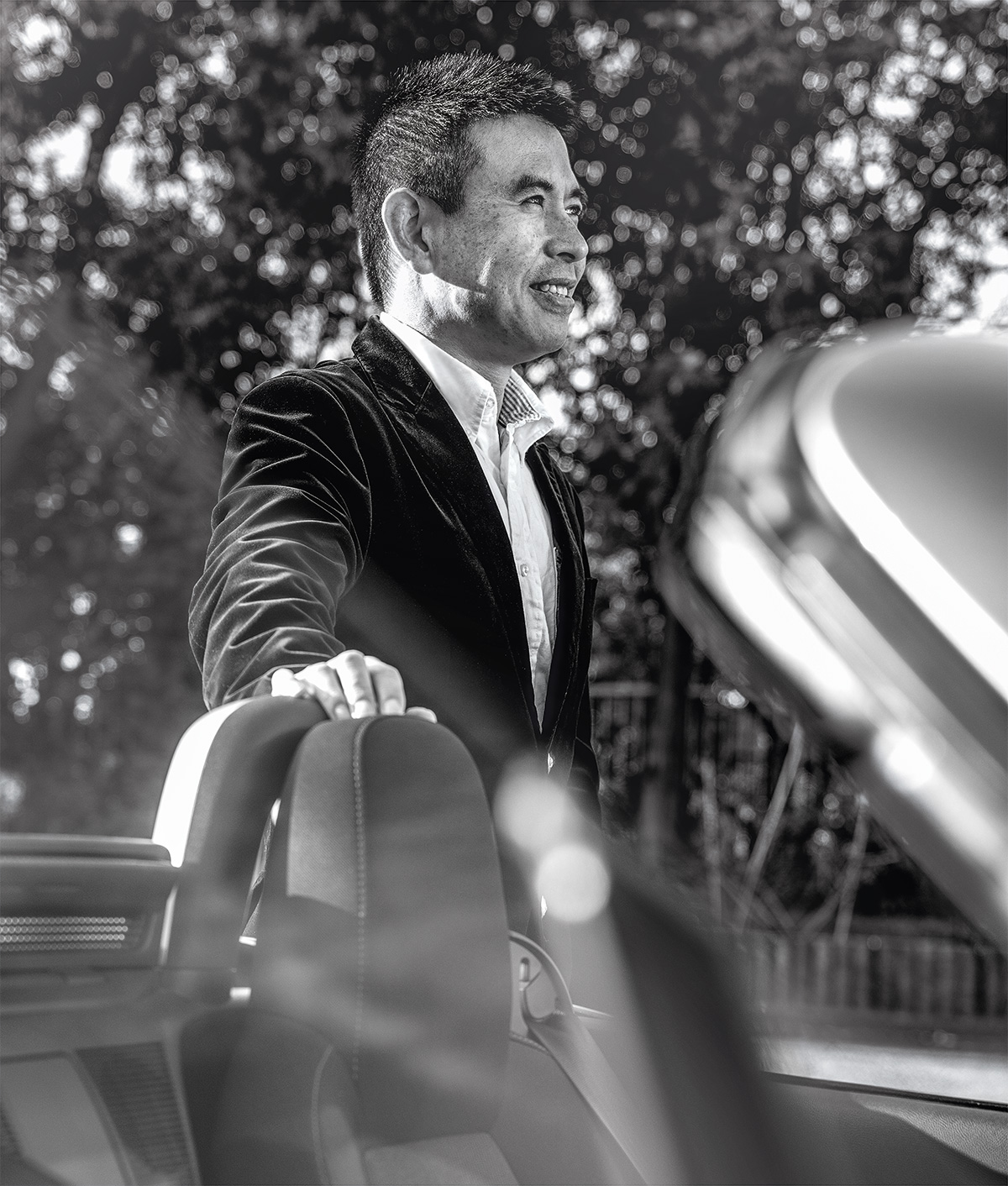 A leading member of a Japanese NC fan club, Toshi Deki says the social element of MX-5 ownership is as important as the drive

For car consultant and racing driver Toshihiro Deki, the obsession with wheels started from birth. “My dad got his driving licence around the time I was born, so I grew up with the thrill of hearing and feeling the engine and smelling the exhaust. By age two I could look at a car with a cover on it and know what it was, and got into racing watching it on TV.”

As an adult, Toshihiro, known simply as Toshi, bought a first-generation Eunos Roadster as soon as it was released. “It captured my imagination like no other car ever has,” he says. He has since owned several variations, including an NB TD-1001R and an NC TCR 2000, both modified models he helped build and sell. Now, in addition to the limited-edition M2 1001, he owns an NC RHT and declares its reliability, safety and consistency of performance “perfect”.

It’s the MX-5’s simple design, satisfying engine power and smooth handling that have long kept Toshi hooked. “It was clearly developed by people who really know what’s important in a lightweight sports car,” he explains. “The tuning is key, too; the Roadster has such great straight-line stability for a small car,” he adds. Toshi wears many hats at his company D-Technique as driving instructor, writer and consultant, but he’s also a representative of the NC Roadster Fan Club of Tokyo and organises its annual meet-up at the Hakone Turnpike.

“Roadster owners are all easy to talk to and instantly become friends,” he reflects. “They don’t just boast about their own car, they enjoy the car together. I think it’s the Roadster’s character that inspires them to be like that.”

Model: NC
Produced: 2008
Owned since: 2019
MX-5 highlight: “I drove the NC from LA to the Grand Canyon, on to Sedona then to Las Vegas. The scenery was magnificent and I was struck by the sheer scale of planet Earth.”

“I’M REALLY CONNECTED TO THE CAR, LIKE WE’RE FRIENDS”

Learning to drive in an MX-5? It’s a thrill says 15-year-old Kate Keller of the MX-5 Club of New South Wales

The Mazda MX-5 Club of New South Wales, celebrates its 30th birthday next year, having been founded within months of the car arriving in the country for the very first time. “The cars were few and far between in those days, and every MX-5 you saw got an enthusiastic wave,” says Jean Cook, who was one of the original founding members.

Nearly 30 years later, the club has 1,037 active members and hosts more than 300 social, technical, motorsports and charity events annually. And Jean adds: “I love the fact the membership is so varied. On one side you can have a young P-plate driver and on the other side, someone of my age!”

The club’s youngest member is 15-year-old Kate Keller, daughter of the club’s secretary, Mel. Kate takes part in the junior development programme at the club’s driver training days, and in club motorkhanas. “It’s a great way to learn the feel of a car,” she says. “I like learning on the track where you can feel everything. I’m turning 16 later this year and can get my learner’s permit. I’m saving up for an NB. I’m really connected to the car, like we’re friends or something.”

While Kate saves up for her NB, club member Lou Iezzi counts a total of 117 MX-5s he’s owned since 1999, when he was introduced to the car. “My first MX-5 was a 1989 white NA, soon followed by a neo-green race car. I’m a mechanic so I worked out I could buy MX-5s and pull them apart, repair, restore and sell them. Basically, it finances my habit.” Lou currently owns a red NC and a black NC race car. “The MX-5 is not just a car – it has a soul,” he explains.

Model: ND RF
Produced: 2017
Been driving since: June 2016 (in motorkhana)
MX-5 highlight: “I was practising corners and one of my mentors said: ‘Just feel it.’ So I gave it the boot and swooped out of the corner.”

Model: ND
Produced: 2015
Owned since: 2015
MX-5 highlight: “Being a member of the MX-5 Club of NSW has enriched my life greatly. There is always something going on somewhere.”
New Mazda MX-5
Categories:
Zoom-Zoom